Last week, I extolled the virtues of tulips, daffodils and other spring bulbs, which we don't have in Florida, except for what we can scrounge up in grocery stores and florist shops. So we have no mania here, unless...

We do have spring bulbs here, commonly called Amaryllis. We don't have the massive displays, or the number of varieties to be found in tulips, but some of us have our own private manias, filling up every available spot in our gardens with what I consider to be equally elegant and equally anticipated spring displays.  I alluded to them twice already, in Theme and Variation - the Amaryllidaceae and in My Pandemic Garden 1. Winter and Spring

First of all, they're not really in the genus Amaryllis, which consists of two species native to southern Africa. What we call by that name, through historical confusion, are in  Hippeastrum, a genus of some 90 species native to tropical America. So much for the botanical geekery.

Though roughly the same shape as tulips, Hippeastrums are bent to the side, an adaptation for pollination by hummingbirds, and they have inferior ovaries, which means the seed capsules develop below the tepals, rather than above them as in tulips.

Over 600 hybrids and cultivars have been developed, drawing upon several of the wild species, much of it in Holland, the international center of bulb mania. Colors range mostly from red to pink to white, while some have an orangish tint. Some yellow-ish varieties have been bred, but there are no true brilliant yellows, and if you see blue Hippeastrums for sale, I have a bridge in Brooklyn I can sell you for cheap! There are no true blue or purple pigments in the genus. Some may be dyed the way they dye those horrible blue Phalaenopsis you see in grocery stores sometimes.

The early varieties appear as early as March, depending on the weather, and the parade of later varieties can continue into early May. Each stalk typically produces 4-8 blooms, and flowers can last up to a week. So with my brief betrayal to see the tulips in April, I didn't miss much.

So one can create his or her own spring spectacle with these subtropical beauties.

Posted by Frederick B. Essig at 2:01 PM No comments:

Having been essentially house-bound for the past two years, I  recently had the good fortune to visit the Netherlands with my family. Most specifically I wanted  to see the famous tulip displays at the Keukenhof Garden. The garden is located at the village of Lisse, in the middle of the bulb-growing region of the country, a 40-minute bus ride from Amsterdam. I was lucky to arrive at the peak of the tulip display in mid-April. I wasn't alone!
The garden is only open to the public from mid-March to early May each year the Amsterdam Tulip Festival. People come from all over the world for the display that features 800 varieties of tulips, along with daffodils, hyacinth, crocus, fritillaries, and grape hyacinth. Covered pavilions also host displays of orchids, anthuriums, and  orchids.
Prior to the pandemic, about 1.5 million people, or about 26,000 per day, visited during the brief season. With the garden closed for the past two years, pent-up tulip cravings brought crowds rivaling those at Disney World the day after Christmas. This is the present-day version of tulip mania.
There are about 75 wild species of tulips, native to southeastern Europe, the middle east, and central Asia. From these, thousands of cultivars and hybrids have been created.
The original "tulip mania" occurred in the Netherlands during the 17th century. This was at the height of the Dutch empire and prosperity, and the Dutch were the leading growers and breeders of tulips and other bulbs at that time. Rare varieties sold for hundreds or thousands of Guilders. I don't know how much a Guilder at that time was worth in today's dollars, but I'm sure it's a lot. Tulips and tulip "futures" were traded on exchanges similar to our modern stock exchange.  An investment frenzy began in 1634, creating the first recorded investment "bubble." When the tulip market collapsed in 1637, huge fortunes were lost.
Today, many of you in temperate parts of the world can enjoy the fruits of the Dutch tulip breeders efforts in your own backyards and local parks, though we in Florida are restricted to paltry, short-lived potted specimens from our florists and grocery stores!
In any case, now enjoy the pictures of tulip mania 2022 in Koekenhof.

Posted by Frederick B. Essig at 2:31 PM No comments:

My Pandemic Garden 2. Summer and Fall

With summer heat and humidity, only the most rugged flowers, fruits, and vegetables will thrive.

June. Summer officially arrives and the more feint at heart blossoms of spring give way to the tropicals.

August: The heat and rain continue, ripening guavas, passion fruits, and okra, with some Hibiscus and Cannas for color.

November: Some flowers oblivious to seasonality continue, along with ripening fruits. 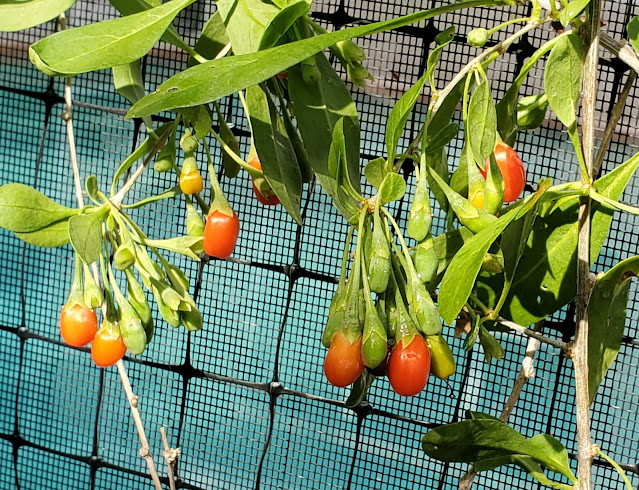 Fresh Goji berries, Lycium barbarum,  appear in the Fall or sometimes in the Spring, avoiding both cold and hot weather. They are a member of the Tomato Family.

December: Of course, what would December be without Poinsettias?

Posted by Frederick B. Essig at 2:37 PM No comments:

My Pandemic Garden 1. Winter and Spring

I usually write about wild flowers and wild places here, but for the past year I have been on an extended expedition to my backyard! So what you will see in this post are descendants of wildflowers that are well adapted for central Florida gardens. The first installment covers winter through spring, the only part that most of our visitors from up north ever see. As long as it doesn't actually freeze during the this time,  the display of colorful flowers never ends.  January: In a mild year, many tropical plants continue to bloom this month, including Anthuriums and Hibiscus, along with plants that prefer cooler climates anyway. It is the season for leafy green vegetables like mustard greens, bok choi, green onions, and lettuce.

February: Winter continues, but it is springtime for Azaleas and Camellias

March: Florida's spring is in full swing, and for us, amaryllis blooms replaces the tulips and daffodils of the north.

April: Amaryllis continues to bloom, and the harvest of mulberries lasts until the middle of the month, and we have some new additions:

May:  Though summer weather is here, spring continues with more slowly emerging flowers.

Essig 00001. The first of thousands, taken in southern California. A species of Opuntia, Beaver-tail cactus

All images copyright by Frederick B. Essig. Images may be used freely for educational purposes with acknowledgement of source. For use in publication, contact the owner for permission at botanyprofessor@gmail.com.